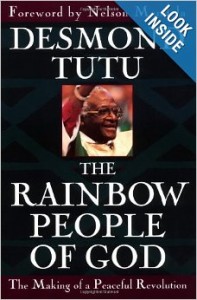 “At home in South Africa I have sometimes said in big meetings where you have black and white together: ‘Raise your hands!’ Then I’ve said, ‘Move your hands,’ and I’ve said, ‘Look at your hands — different colors representing different people. You are the rainbow people of God.’

This is a collection of miscellany-speeches, letters, sermons, interview extracts-by Nobel Peace Prize winner and Anglican Archbishop Desmond Tuto, who since 1976 has spoken out against apartheid and for human rights.

“The Bible and the church predate Marxism and the ANC by several centuries,” we read here in his letter to rabidly anticommunist South African President P.W. Botha in 1988, and indeed, Tutu’s deep faith and biblical grounding infuse his communications. His denunciation of apartheid, especially in testimony to a government commission investigating church activists, has an imperturbable impact (“human beings are created in the image and likeness of God”‘).

After the 1990 lifting of the ban on political powers, Tutu’s role receded, but he has remained a voice of conscience, especially when criticizing the “culture of violence,”‘ which he stresses cannot be blamed solely on apartheid. While this book is mainly for browsing, the sections are linked by a useful narrative that explains their historical context. – Publishers’ Weekly (1994)